Nearly all new mobile devices not only feature geo-location but set its activation by default. Many of the most popular mobile apps are built around the premise of geo-location to help you navigate the streets, find new restaurants and other points of interest, and even find your friends, so more and more mobile users are enabling this function. As such, a significant number of social media posts made from a mobile device have geo-location coordinate metadata associated with them. The evidentiary value of such information cannot be understated.

For court purposes, the content of such Tweets may be admissible hearsay themselves even if the actual identity of the author of a Tweet is never ascertained.  Under Rule 803(3) of the Federal Rules of Evidence, “[a] statement of the declarant’s then existing state of mind, emotion, sensation, or physical condition . . . but not including a statement of memory or belief to prove the fact remembered or believed unless it relates to the execution, revocation, identification, or terms of declarant’s will” is not excluded by the hearsay rule. Rule 803(3) arguably describes the vast majority of Tweets, especially those from the likes of Paris Hilton or Charlie Sheen.

And then there is the “excited utterance” exception under Rule 803(2) which provides that, “[a] statement relating to a startling event or condition made while the declarant was under the stress of excitement caused by the event or condition” is not excluded by the hearsay rule. So, a Tweet stating “Oh my gosh, a big SUV just ran a light and nailed that Prius!!!!” would arguably fall under Rule 803(2).

To enable our user base to leverage this key evidence, this week we are announcing a major enhancement to X1 Social Discovery software that we believe significantly advances the ball for social media investigations. X1 Social Discovery will now be able to map a given location such as a city block or even a full metropolitan area, and search the entire public Twitter feed to identify any geo-located tweets that have been made in the past three days (sometimes longer) within that designated area, as well as to capture any new tweets within that area going forward. This capability is extremely useful for law enforcement, corporate security and civil litigators.

Below is an example of a geo-located area with X1 Social Discovery, with the highlighted, captured Tweet suggesting that the author could be a key witness to a traffic accident: 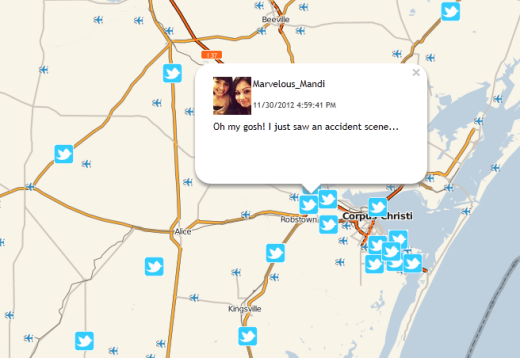 From there, an investigator can silently follow identified persons of interest in furtherance and highly efficient investigation. For law enforcement, this is obviously useful to gather facts and identify potential witnesses for various crime scenes. This feature can also be employed proactively, to map an area around a school, an embassy, an oil drilling facility overseas, or other critical infrastructure assets to collect and store any geo-located tweets in real time. But in order to take full advantage of this ability to gather key evidence, you need to own the software at the time of the incident.

This upgrade is part of our continuing innovation for X1 Social Discovery. We strongly believe that we have the top social media investigation tool on the market and this new feature only solidifies this position.

> To learn more, contact us for a demo or come visit us next week at Legal Tech New York, where we will be in booth #2012.