It was a great show last week at LegalTech New York. Definitely an increase in the number and quality of attendees and it was nice to see many friends and colleagues both old and new.

Also very noticeable were the many, many vendors sporting predictive coding (aka technology assisted review) messaging in their respective booths and various forms of marketing material. In fact, one industry colleague pointed me to a recent bold prediction offered by Recommind lawyer Howard Sklar, essentially proclaiming that predictive coding will have really hit the big time when a state bar organization issues an ethics opinion stating “that failure to use predictive coding is ethically questionable, if not unethical.” Sklar goes on to predict that such an opinion will come within the next 18 months.

I don’t disagree that such a development would be a big deal. But my question is, why stop at an advisory ethics opinion? What about an actual published court opinion where a sitting appellate judge decrees, without mincing words, that legal ethics obligations require lawyers to employ predictive coding? Now that would be huge. Something, in fact, like Griffin v. State, 192 Md. App. 518, 535 (2010), which addresses another hot topic in eDiscovery:

“[I]t should now be a matter of professional competence for attorneys to take the time to investigate social networking sites.”

Now to be fair, I must point out that Griffin v. State was reversed and remanded on other grounds (419 Md. 343 (2011)), but I would argue the overall impact from an ethics and best practices standpoint is still there.

Sklar also points out three appellate level cases with written opinions that discuss the concept of predictive coding, without any definitive rulings compelling its use, but nonetheless discussing the concept. Two of the three are even retrievable on Westlaw. I think such appellate-level published decisions are important, which is why we highlight the several thousands of published court decisions in the past three years (see here and here) that have compelled the production of, admitted into evidence, or otherwise recognized the importance of social media evidence to the case at hand. New cases are being published every day, to the point where we candidly have stopped counting due to the deluge. So by the standard set by of my esteemed fellow eDiscovery lawyer Mr. Sklar, social media discovery is a very hot field indeed.

“IF YOU AINT BLASTIN, YOU AINT LASTIN!!!!”: How to Authenticate Incriminating Social Media Evidence

In our recent social media ethics webinar with John Browning of Lewis, Brisbois, (recording and slides available here) we noted the significant number of recent criminal matters involving key social media evidence. In reviewing these cases that are documented on our site, we continue to be amazed at what many alleged gang members choose to post on their public-facing Facebook and MySpace accounts. 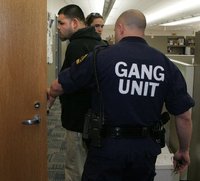 This led us to muse that it might be a good idea for Facebook to embed the Fifth Amendment of the US Constitution into their terms of service as a friendly reminder about their users’ right against self-incrimination.

Speaking of which, last month a Texas Appellate court upheld the murder conviction of Ronnie Tienda, who owes his trip to the slammer almost entirely on the content of his MySpace page. The case also underscores some important lessons on authenticating highly contested social media evidence.  In Tienda v. State (Tx App. 2012) the prosecution introduced several photographs from Tienda’s MySpace page featuring Tienda exhibiting gang signs and other gang paraphernalia, one with the helpful caption, “You ain’t BLASTIN, you ain’t lastin,” and another boasting “I LIVE TO STAY FRESH!! I KILL TO STAY RICH!! N OTHER WORDS IMA GO TO WAR BOUT MY SH**” followed by another notation, “Rest in peace, David Valadez” with a pointed link to a song played at Valadez’s funeral. David Valadez, of course, was the victim. Police also amassed a trove of other MySpace evidence including Tienda’s chat conversations with other suspects under investigation and even referring to the events of the night in question and concerns about the ensuing police investigation.

The Court admitted the MySpace printouts into evidence over the defendant’s objection, with the prosecution laying the foundation for these pictures through various circumstantial evidence. The prosecution pointed to various metadata and other circumstantial evidence from Tieda’s MySpace page, including his username, which was consistent with Tienda’s commonly known nick name, his email addresses registered to the account, User ID number, stated location (Dallas),  references to the victim’s funeral, communications with other suspects, and numerous posted photos of Tienda with associated date and time stamps.

The Texas appellate court determined that “this is ample circumstantial evidence—taken as a whole with all of the individual, particular details considered in combination—to support a finding that the MySpace pages belonged to the appellant and that he created and maintained them.”

While the prosecution achieved a good result, it faced a concerted challenge on the authenticity of the evidence, and as we have seen in other cases, relying on simple printouts of social media site pages is a very risky value proposition. This highlights the importance of utilizing best practices technology such as X1 Social Discovery to ensure all supporting metadata and other key circumstantial evidence is properly and comprehensively collected. As the Tienda case reveals, there is a wealth of relevant social media evidence out there, and if you are not properly collecting, your opponent will be objecting.