As an epilogue to our recent post identifying various relevant social media evidence missed by prosecutors in the State of Florida vs. George Zimmerman prosecution, another instructive moment illustrated the importance of general website evidence and why many of our law firm clients tell us they capture website evidence on a daily basis. I’ll have more on that second point later.

Zimmerman’s lawyers called Mixed Martial Arts (MMA) trainer Adam Pollock, who trained George Zimmerman at his Florida gym from October of 2010 until “the end of 2011″— about two months before the shooting of Trayvon Martin. The defense, with apparent success, cited Pollock’s testimony to establish that the former neighborhood watch volunteer was an unaccomplished fighter and ineffective at self-defense. “He was an overweight, large man when he came to us, a very pleasant, very nice man, but physically soft – predominantly fat,” Pollock testified. “Not a lot of muscle. Not a lot of strength.” “He was about a 1,” said Pollock, when asked to rank Zimmerman’s athletic skill on a scale of 1 to 10.

It turns out however, that Pollock’s gym prominently and proudly advertised George Zimmerman as their client, offering information about obtaining the same self-defense training he received: 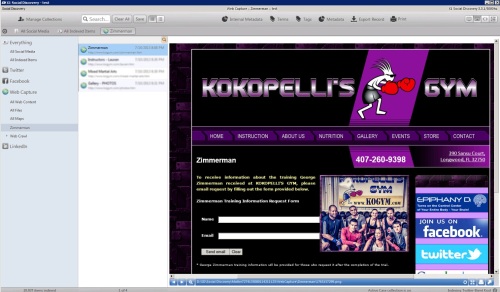 This evidence, which was captured by X1 Social Discovery, would suggest bias and arguably contradicts Zimmerman’s lawyers assertion that he lacked self-defense prowess. The prosecution did not have this information available on cross-examination and, apparently learning of it at a later time, tried to re-call Pollock as a rebuttal witness. However, the court sustained the defenses’ objection on procedural grounds, noting that the State should have raised the issue on cross-examination. Also, as a side note, this web page had been deleted by then.

This is just one illustration as to why our larger law firm clients tell us they employ X1 Social Discovery on a daily — sometimes hourly — basis, as website evidence factors prominently into many types of legal matters. Witnesses often maintain personal websites or are employed by a company with a large website that often harbors bits of key information buried in the recesses of the site, yet are publicly available.

As such, all available website evidence associated with parties and witnesses should be preserved when their identities become known. Due diligence for mergers and acquisition and other securities matters, compliance monitoring, and discovery related to business disputes and intellectual property are other use cases that require extensive capture analysis of website data.

But only best practices technology that provides a scalable, automated, defensible and cost-effective capability enables website collections to be performed on a routine and standard basis. Simple screen captures are not defensible, do not scale as they only allow very limited coverage of an entire site, do not collect source page data (which often presents key evidence) and do not allow for instant search of the collected data, which is essential for a scalable and effective process. With tools like X1 Social Discovery, website data can be collected either on a single web capture or by crawling an entire site consisting of thousands of pages. Additionally, the data is instantly searchable and subject to litigation review process with filtering, intuitive first pass review, tagging, and finally export to attorney review platforms for tertiary review and production.

As with the case of other forms of electronic evidence collection, the compelling legal requirement exists long before scalable, automated and cost-effective technical solutions are developed. Now that such tools are available, we are seeing more and more legal professionals bake-in website evidence capture, along with social media, into their routine discovery processes.